At our annual spring banquet yesterday, the outgoing president (that's me) oversaw the installation of the four new officers elected at the program meeting in March. We can never remember precisely what the installation of new officers entails, so we had to improvise. I considered stepping down in a blaze of glory: shouting "HAIL GAIA!" and removing my still-beating heart from my chest with an obsidian blade and feeding it to a flock of migrating gnatcatchers. But that seemed a little messy, so I settled instead for sharing brief biographical sketches of JVAS' benevolent new overlords. Please join me in welcoming our new secretary, Kristin Joivell; treasurer, George Mahon; vice president, Mark Bonta; and president, Laura Jackson. 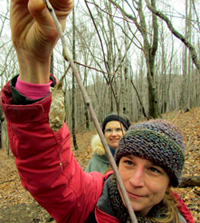 Kristin Joivell, shown here on a recent JVAS hike examining a promethean moth cocoon, is our new secretary. Kristin teaches kindergarten at the Juniata Valley Elementary School, lives in the Huntingdon area, and brings an infectious enthusiasm and a wealth of knowledge about nature to the JVAS board, being both well-read and widely traveled. Stick close to Kristin on a nature hike if you want to learn the i.d.s of critters and wildflowers — or to generally just have a good time. 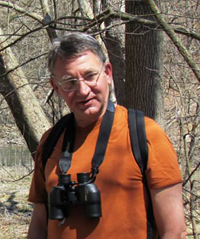 Despite his regular attendance on field trips and thus his frequent run-ins with Stan Kotala's camera, JVAS treasurer George Mahon is almost always seen with his eyes turned to the ground or the sky, displaying the same restless curiosity that led him to teach junior high science in Altoona for many years, and to first become involved in JVAS activities way back in the late 1970s. I have also grown to appreciate George's endless patience and attention to detail over the past year as he's eased into the treasurer position — surely one of the most thankless and time-consuming posts in any organization. 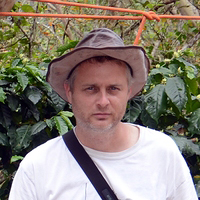 You'd think I'd have a better photo of my own brother, but he got off Facebook last year, so what can I do? Mark Bonta agreed to step in as vice president, which mainly means he'll be the programs chair. He's been attending programs pretty regularly since he started teaching geography at Penn State Altoona last fall. He and his wife will be moving to the area permanently in August, after a couple of years in Philadelphia and many years in Mississippi before that. Mark was a member of JVAS as a kid, which helped to spark an interest in birding and nature that now makes its way into his classes and research. He's currently leading an expedition in the mountains of Honduras to document a possible new species of ant-shrike. 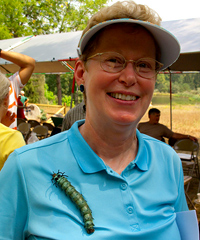 Laura Jackson, our new president, hardly needs an introduction. She and her husband Mike (also a member of the board) have been among our most active members for years, attending numerous township meetings, writing letters, agitating, advocating, giving slideshows and workshops, and putting their own time and money where their mouths are on their mountainside property near Everett — a conservation showcase. Laura's always-pleasant demeanor masks a steely resolve, as many developers and politicians have learned to their sorrow. We are deeply fortunate that her work with SOAR has finally slowed down enough to permit Laura to take over as JVAS president. And oh yes, that's a hickory horned devil on her shirt.

Thanks to all four new officers for stepping up to the plate. The future of the chapter looks very bright.