While renewable energy projects are an important step away from fossil fuel consumption and have great potential to mitigate climate change impacts by reducing carbon, they must be sited properly. In Pennsylvania, the best wind resources are at higher elevations, so wind turbines are most often sited on forested mountains instead of degraded lands. Joseph Kiesecker, Lead Scientist for The Nature Conservancy, points out in his book, “Energy Sprawl Solutions,” that it is possible to balance energy needs and conservation, but we need careful planning, or we could trade one crisis for another: “land-use change and conflict.” His research shows that wind projects should be built on degraded lands, instead of forested mountains, in order to protect critical wildlife and their habitats.

Such is the case for Dunning/Evitt’s Mountain, a forested ridge in Bedford County that contains core forest habitat for several species of conservation need. CPV Kettle Wind, LLC is in the early permitting stages of an industrial wind turbine project proposed for the top of Dunning/Evitt’s Mountain. The turbines would be constructed just south of Rt. 869 and could extend for over 5 miles along the top of the mountain in East St. Clair, South Woodbury, and Bedford Townships. Dunning/Evitt’s Mountain is quite narrow in areas, so a cut and fill construction project would most likely involve:
a. removal of trees on the top of the mountain
b. blasting of bedrock to create rubble
c. bulldozing and compacting the rubble to create a shelf wide enough to support wind turbine pads and roads
d. deep sedimentation ponds below each wind turbine to control stormwater runoff – these ponds would be filled with permeable soil obtained off-site to slow runoff
e. trenches between turbines for electric cables
f. a swath of trees removed down the mountain so an above-ground transmission line can be run from on top of the mountain to the substation along Black Bear Lane

Dunning/Evitt’s Mountain is the source of water for several streams that rely on the slow percolation of rainwater onto the forested slopes. On the eastern side are high quality streams that support cold water fisheries such as Beaver Creek, which originates in the “kettle,” formed by the curve of Dunning Mountain. Beaver Creek flows into Yellow Creek near Loysburg, contributing to one of the most important trout streams in Bedford County. Yellow Creek is classified by DEP as HQ CWF: high-quality coldwater fishery. Much of its flow is from Beaver Creek and smaller tributaries that originate on Dunning Mountain.

Furthermore, the community of Salemville depends on water that originates on the eastern slopes of Dunning Mountain. This water source could be degraded and reduced by deforestation and increased stormwater runoff from construction.

The bigger streams on the western side of Evitt’s Mountain (in Dutch Corner) are Oppenheimer Run, Imlertown Run, and Pleasant Valley Run; these all flow into Dunning’s Creek. These streams are classified by DEP as WWF: Warmwater fisheries. Although the water quality is not as high as those streams on the eastern side of Evitt’s Mountain, these streams not only provide clean water to a species of concern, the wood turtle, but they are also important sources of water for many farms in Dutch Corner.

In conclusion, an industrial wind project on Evitt’s Mountain would drastically change the hydrology and production of clean water that originates from the mountain slopes.

The Conservation Opportunity Area (COA) Tool was conducted in the area where the proposed project runs along the top of Dunning/Evitt’s Mountain.

Below is a summary of the results of COAT for the proposed Dunning/Evitt’s Mountain wind project area (See full report in Appendix A):

Western Pennsylvania Conservancy published the Bedford County Natural Heritage Inventory Update in 2018. http://www.naturalheritage.state.pa.us/CNHI.aspx
This project was supported and funded by numerous organizations, including the Bedford County Board of Commissioners. Below are pertinent notes from that report.

The top of Dunning/Evitt’s Mountain represents one of the largest continuous forests in Bedford County (page 19): 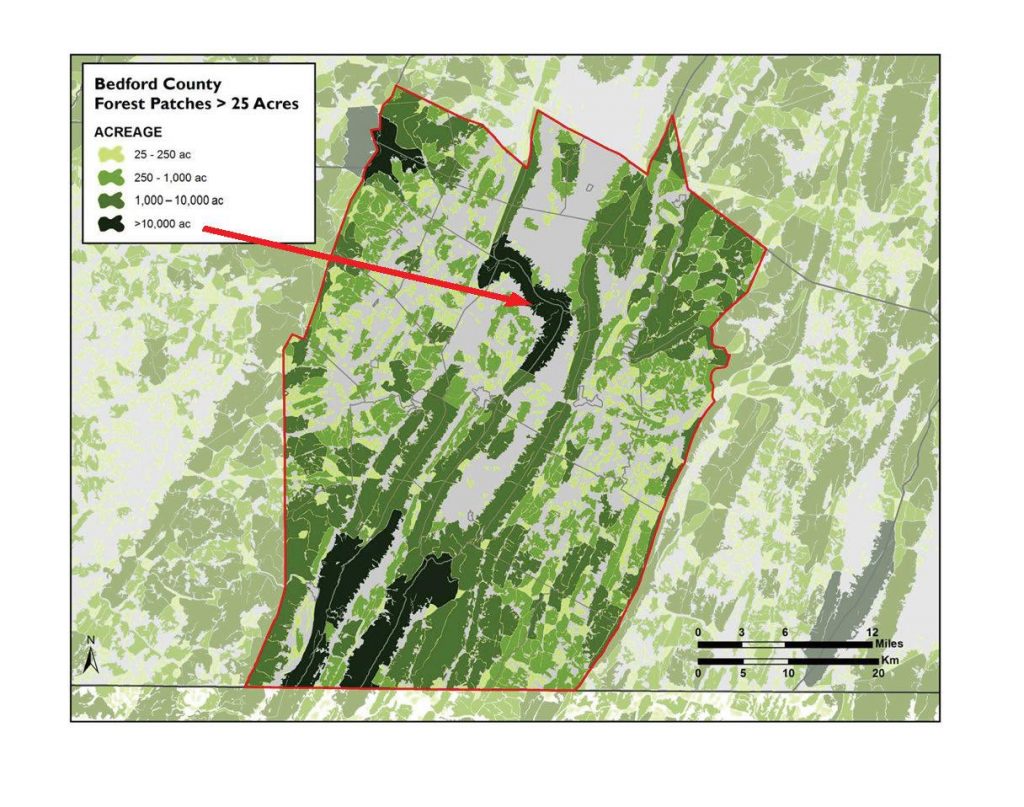 A Natural Heritage Area (NHA) is an area containing one or more plant or animal species of concern at state
or federal levels, exemplary natural communities, or exceptional native biological diversity. NHAs include both
the immediate habitat and surrounding lands important in the support of these elements. They are mapped
according to their sensitivity to human activities, with designations of Core Habitat and Supporting Landscape
areas. The sensitivity of each designation varies significantly according to the particular plant, animal, or natural community habitat that the area represents and is discussed in detail in each NHA Site Description.
Core Habitat – areas representing critical habitat that cannot absorb significant levels of activity without substantial negative impacts to elements of concern.

page 27: A rank of global significance is defined as:

Sites which have global importance for biological diversity and Pennsylvania has a primary role to maintain (e.g., most of the known occurrences are within Pennsylvania). Sites in this category generally contain one or more occurrences of species of global concern (e.g., G2 and G1) or large concentrations of species of lower significance.

(Note: The area of Evitt’s Mountain identified as “Dunning Mountain Forest Natural Heritage Area” is the same location where the industrial wind project is proposed.)

Specific threats and stresses to the elements present at this site as well as conservation actions include:

Map of Dunning Mountain Forest NHA (page 132): Only 7 out of 57 NHAs are ranked as having GLOBAL SIGNIFICANCE in Bedford County. Dunning/Evitt’s Mountain is one of them. 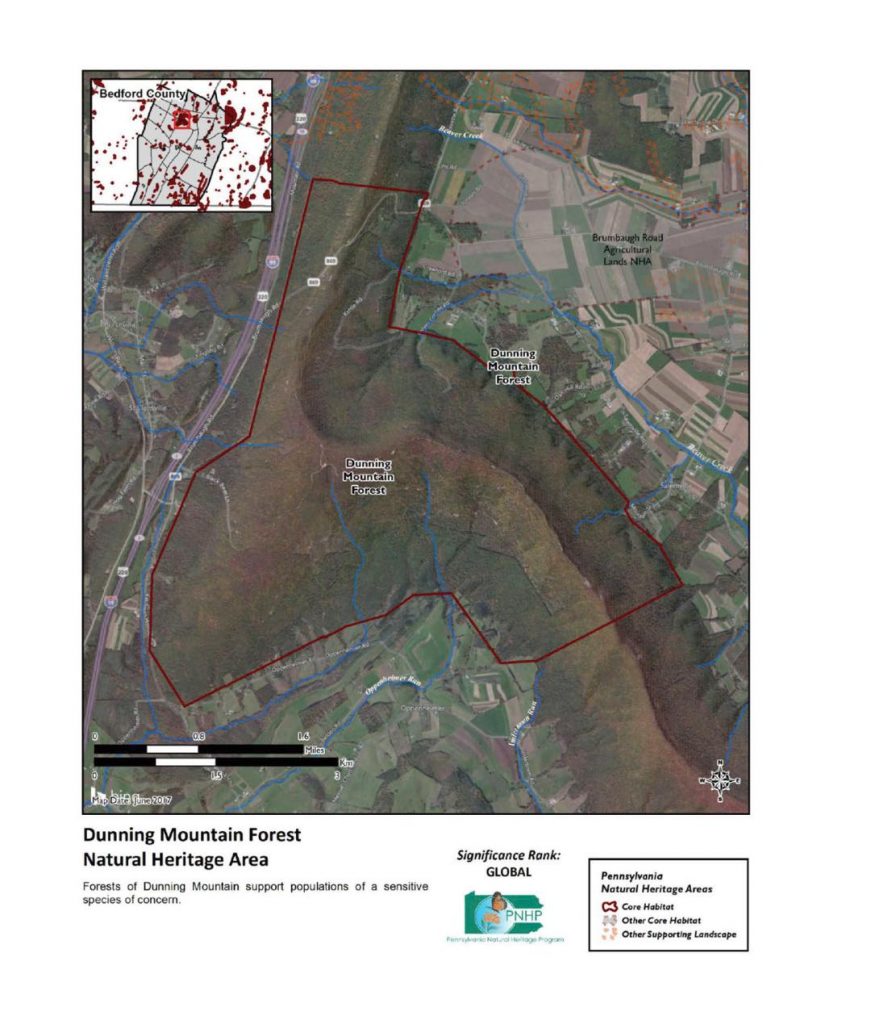 In conclusion, any type of development along the top of Evitt’s/Dunning Mountain will be inappropriate since there are numerous negative environmental impacts to the watersheds, forests, and wildlife.

Although we need renewable energy infrastructure to combat climate change, surely there are more appropriate sites where less environmental damage will occur. Reclaimed strip mines, brown fields, and developed areas should be considered for renewable energy projects, not forested mountains that serve as important habitats for species of concern, migratory corridors, and sources of clean water.